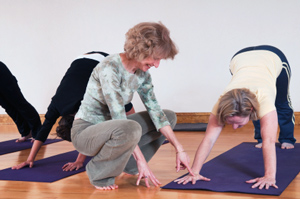 Iyengar Yoga is a style of yoga known for its precision, alignment, and use of props. It is one of the most popular styles of yoga in the United States today. Created and developed in the 20th century by B.K.S. Iyengar (pronounced, “eye-EHN-gar”), this practice usually contains only a few poses per class and each pose is held for long periods of time. Iyengar Yoga is known for its healing benefits, particularly for those overcoming injuries or illnesses. It builds strength and flexibility, while improving overall well-being in the mind, body, and spirit.

Iyengar Yoga was founded by the master teacher, B.K.S. Iyengar, who began teaching yoga in 1936 and continues to teach today. Born in 1918, Iyengar studied with T.S. Krishnamacharya (who was also Iyengar's brother-in-law) in Mysore, India. Iyengar learned yoga from Krishnamacharya as a way to improve his health after suffering through tuberculosis as a young man.

Since the founding of his Ramamani Iyengar Memorial Yoga Institute in Pune, India, in 1974, Iyengar has personally trained thousands of yoga teachers, many of whom are in the United States. His methods of precision, alignment, and use of props are taught in Iyengar studios around the world.

B.K.S. Iyengar is also the author of many well-respected and popular yoga books, including Light on Yoga, which was published in 1966 and is considered by many to be the "bible" of modern yoga practice. Light on Yoga includes hundreds of images of yoga poses with detailed descriptions and instructions for breathing exercises (called "pranayama" in Sanskrit). Two other popular books he wrote are Light on Pranayama and Light on Life.

Iyengar's teachings draw heavily from an ancient text called the Yoga Sutras, which was compiled by the sage Patanjali around 150 BCE. The Yoga Sutras contain an outline for the "Eight Limbs of Yoga"," an eightfold path that leads to self-realization. The eight limbs are:

Iyengar based his yoga philosophy and methodology on these eight limbs, creating a physical, mental, and spiritual guide to living.

While others are asleep when duty calls and wake up only to claim their rights, the yogi is fully awake to his duty, but asleep over his rights. Hence it is said that in the night of all beings, the disciplined and tranquil man wakes to the light.

Components of an Iyengar Yoga Practice

Iyengar Yoga is well-known for its emphasis on the precise alignment of the body, which is achieved by using props, such as blocks, bolsters, and chairs. This emphasis highlights yoga as a science more than an art, unlike what you might find in a creative flow class, like Vinyasa Yoga. In yoga, it is believed that by placing the body in a particular way, very specific health results will be gained. By using props to help learn the correct alignment, Iyengar teaches that every student can achieve these results with practice, consistency, and dedication. Some of the props used in Iyengar Yoga, which are also popular in other styles of yoga, include yoga blocks, straps, and blankets. Iyengar also includes lesser-known props, such as bolsters, pillows, chairs, and straps that are secured to a wall.

Iyengar Yoga classes do not include music or chanting. Students hold the poses for long periods of time — up to several minutes — to learn and correct their habitual patterns of movement. Some Iyengar teachers and studios require their students to wear clothes that don't hide their form (such as leggings and leotards), so the teacher can more easily view their alignment. Iyengar teachers are trained for many years, and certification in the Iyengar method is very strict. If you have an Iyengar-trained yoga teacher, you can be sure that he or she is very well-trained and knowledgeable!

There is no "flowing" between poses in an Iyengar Yoga class, nor is the room heated, such as in Ashtanga or Power Yoga. Instead, students rest in Child's Pose (Balasana) or Corpse Pose (Savasana) between poses. But don't let the lack of heat and flow fool you — holding the poses for long periods builds strength and can be very demanding! The use of props helps all students adapt to this style of yoga, even those with injuries, illnesses, or other physical limitations. Advanced yoga students who practice other traditions may also sometimes practice Iyengar Yoga to gain a deeper understanding of the precise alignment for the poses.

Align with Your Yoga

Iyengar Yoga can be a great way to learn the technical aspects of yoga poses, while gaining a deeper understanding of your own body and how it works. Additionally, aligning your practice with the philosophy of the Yoga Sutras can create many positive changes in your life outside of yoga class. If you're looking for a precision-based style of yoga that offers healing benefits and will also challenge your mind, body, and spirit, Iyengar Yoga might be exactly what you're seeking!

The Yamas & Niyamas in Yoga

How to Do Revolved Half Moon Pose in Yoga