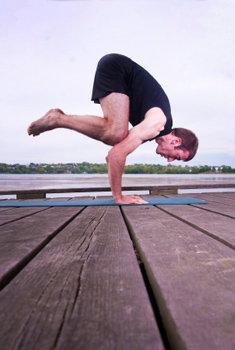 Ashtanga Yoga, also called Ashtanga Vinyasa Yoga, is a vigorous and flowing style of yoga developed in the 20th century. It involves synchronizing breath with progressive and continuous postures, which produces internal heat while detoxifying the body. It builds strength, flexibility, and stamina, while calming the mind and improving overall health.

Ashtanga (ash-TAHN-gaa) is based on six levels of practice sequences that increase in difficulty. These are called Primary Series, Secondary Series, and Advanced Series A, B, C, and D. Presently, though, many Ashtanga studios in the U.S. only teach the Primary and Secondary Series, as the latter ones are appropriate only for very advanced students. Each series is comprised of a set of poses that are always performed in the same order. The sequences are fast-paced and physically demanding.

The Primary Series, called "Yoga Chikitsa" (meaning "yoga therapy") includes 75 poses and takes between an hour and a half and two hours to complete. It begins with a warm-up sequence of poses called "Surya Namaskara A and B" (Sanskrit for "Sun Salutations"). Then, it progresses to standing, seated, inverted, and back-bending poses. Every class ends with final relaxation in "Savasana" ("Corpse Pose").

The Secondary Series, called "Nadi Shodhana" (meaning "channel clearing") is believed to cleanse and strengthen the channels that carry the "prana" (Sanskrit for "life force energy") throughout the body. It is sequenced in a similar fashion to the Primary Series, but includes new poses. Ashtanga Yoga students will only learn the Secondary Series once they have a very strong Primary practice.

The Advanced Series, called "Sthira Bhaga" (meaning "divine stability") are intense practices focused on elaborate arm balances and backbends. They are intended for — and only achieved by — seriously devoted students!

The Ashtanga style of yoga was developed by guru Tirumali Krishnamacharya. Born in 1888, he spent his early years studying various forms of yoga, including physical "asana" (Sanskrit for "posture") practice. The Maharaja of Mysore, India hired Krishnamacharya in 1924 to open a yoga school and teach Ashtanga yoga to the royal family.

Pattabhi Jois became the world's modern guru of Ashtanga. In 1958, he published his discourse on Ashtanga, called "Yoga Mala." The book is now considered the main handbook for students and teachers of Ashtanga.

Madonna is a dedicated practitioner of Ashtanga Yoga! So dedicated, in fact, that the song "Shanti/Ashtangi" from her album, Ray of Light, features the Ashtanga Yoga mantra that is traditionally chanted before class!

Components of an Ashtanga Yoga Practice

This triad is called "tristhana," which means "three places of attention." In Ashtanga, tristhana is employed with the intent to unify body, mind, and spirit.

Vinyasa is the basis of the practice. Ashtanga is performed using "Ujjayi Pranayama," a breathing technique also known as "victorious breath." In Ujjayi, the practitioners completely fill their lungs while breathing through their noses. Every action in an Ashtanga practice is partnered with either an inhalation or an exhalation, linking breath with movement.

Bandhas are internal muscular locks that help to achieve and maintain alignment in the asanas. Using bandhas during yoga postures is intended to intensify the energy of prana so it can eliminate impurities from the body.

Drishti is the practitioner's spot of attention during an asana or pranayama. For example, the gaze could be focused on the thumb or big toe. Focusing on one point helps to develop concentration. With practice, it also allows the practitioner to find balance between inward and outward consciousness.

The elements of tristhana — particularly vinyasa — form the foundation for other styles of yoga, like Vinyasa Yoga and Power Yoga. A Vinyasa or Power Yoga class will often emphasize linking breath with movement, but will not stick to the same particular sequence of poses as an Ashtanga class.

Ashtanga is traditionally learned at the student's own pace, guided one-on-one by an instructor. This is called "Mysore style," referring to the way classes were taught by Pattabhi Jois in Mysore, India. This style is often practiced in a room with other students, who are also on personal Ashtanga paths. Students begin with Primary Series and are given new poses to learn as the teacher sees fit.

The other way to learn is in a class led by a teacher, usually guiding Primary or Secondary Series. In these types of classes, the students practice the entire sequence together at the same pace. Many students opt to learn in a class led by an instructor before progressing to a Mysore practice.

Ashtanga can be an intense and sweaty workout, but it can also be deeply transformative. As students learn to link breath with movement, they often learn to flow more easily in other areas of life off the mat. Practicing each pose in the precise sequence, and receiving personal attention from the teacher, provides an organized learning method that is safe and steadfast.