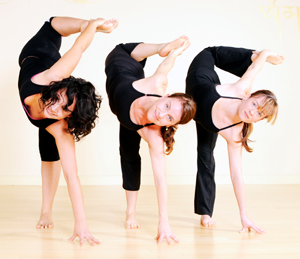 The word "yoga" has many meanings — most often, the Sanskrit word is translated as "union," referring to the connection between body, mind, and spirit, which is available to us when we practice this ancient discipline. Traditionally, the practice of yoga has many mental and physical aspects, including philosophy, meditation, breath work, lifestyle and behavior principles, and physical exercise.

The physical practice of yoga is known as "hatha" yoga and is the discipline most practitioners in the West are familiar with these days. Hatha yoga includes breath work (pranayama) and postures (asanas) — a combination believed to have been developed to prepare the body for long periods of seated meditation, which in turn can lead to spiritual awakening or enlightenment.

One Tree, Many Branches

Within the umbrella of hatha yoga exist many different styles, created and developed by many and various teachers throughout the last couple of centuries. The practices vary in poses, sequencing, and approach, yet ultimately spring from the same root.

The most common and popular styles offered today include, but are by no means limited to:

With so many variations, it can be hard to know which style is best for you. While it would be nearly impossible to cover every single style of yoga in this short guide, here's a more in-depth look at these popular styles.

This style of yoga was developed by B.K.S. Iyengar in the 20th century, and is based on the Eight Limbs of Yoga as laid out in the "Yoga Sutras of Patanjali." The practice strongly emphasizes precise body alignment and the use of props, such as belts and blocks, to enhance and modify the postures.

Also referred to as Ashtanga Vinyasa Yoga, this vigorous style is influenced by the teachings of T. Krishnamurti and was developed by Sri K. Pattabhi Jois in the 20th century. Ashtanga, which means "eight-limbed," involves synchronizing breath with progressive and continuous postures, producing internal heat and detoxifying the body.

These yoga styles are strongly based on the Ashtanga system of linking breath with strong and dynamic movement. "Vinyasa" literally means "to place in a certain way." Vinyasa classes are composed of a steady flow of yoga postures linked with the breath in a successive series to promote fluid and continuous movement between poses.

Power Yoga, a more vigorous style of practice, was popularized by Beryl Bender Birch and Bryan Kest in the 1990s. It emphasizes intense, flowing movements to develop strength, flexibility, and discipline while detoxifying the body and calming the mind.

Anyone who practices can obtain success in yoga, but not one who is lazy. Constant practice alone is the secret of success.

Literally meaning "liberation while living," this style of yoga was founded in the 1980s by David Life and Sharon Gannon. Based on Ashtanga Vinyasa, Jivamukti blends a physically demanding practice with philosophical inquiry, music, and chanting.

Hot yoga gets its name from the heated room in which it's performed. Bikram is one popular style, but the umbrella term "hot yoga" also refers to heated Vinyasa classes (such as Moksha and Baptiste Power Vinyasa Yoga). In hot yoga, the temperatures can range from 90 degrees Fahrenheit to 105 degrees with 40 percent humidity. The heat helps loosen the muscles, which allows for greater flexibility and depth in the poses. Additionally, sweating may help to detoxify and cleanse the body, flushing out waste materials.

Hot Vinyasa classes will typically consist of a flow of postures linked with breath. Bikram Yoga is a style founded by Bikram Choudhury in the 1970s. It's comprised of 26 postures practiced in a systematic sequence. The aim of the practice is to detoxify the body while improving focus, discipline, strength, and flexibility.

Based on the Tantric philosophy of intrinsic goodness, Anusara focuses on alignment, "heart opening" postures, and the spiritual/meditative aspects of hatha yoga. This style of yoga was founded by John Friend in 1997.

Also known as the yoga of awareness, Kundalini uses yoga exercises in conjunction with specific breath work (kriyas), meditation, and mantra to awaken the energy of inherent consciousness.

Not sure which style is best for you? Try streaming some online videos of various styles and practices to get a feel for the pace, poses, and sequencing. While an in-person class with an experienced teacher is always your best bet, watching clips and videos online can give you a better sense of what you're looking for!

This gentle style of hatha yoga emphasizes compassion, physical healing, observation of the mind, and spiritual transformation with the intent to integrate what has been learned into one's daily life.

Integral yoga refers to two specific practices. The first, and more commonly known, is a trademarked style of yoga developed by Sri Swami Satchidananda in the 1960s, which incorporates classical practices of hatha, raja, bhakti, karma, jnana, and japa yoga into one cohesive class.

The second refers to the teachings of Sri Aurobindo in the early 1900s. These teachings seek to synthesize karma, bhakti, and jnana yoga to acquire higher states of consciousness and union with the Divine.

Literally, "sun and moon," hatha yoga is a system of yoga founded in the 15th century that focuses on physical postures, purification rituals, and the subtle body. Today, the term broadly refers to all physical yoga practice and commonly means a gentle yoga class that includes stretching and stress reduction techniques.

This style of yoga founded by Ana Forrest in California emphasizes healing psychic wounds through yoga poses and deep psychological work. The demanding physical practice focuses on abdominal strength and breathing, while the sequence of poses is designed to detoxify the body and release stored emotions.

Founded by Swami Sivananda in the first half of the 20th century, this style emphasizes slow and gentle movement, relaxation, positive thinking, and a vegetarian diet.

Founded by Gary Kraftsow and often used as therapy for back pain, this gentle physical practice is based on the teachings developed by T.K.V. Desikachar in the early 20th century. Viniyoga emphasizes the therapeutic aspects of yoga, one-on-one learning, and adaptation of yoga practices to the needs of the individual.

Two sides of the same coin, Yin and Restorative yoga sometimes get labeled the same, as they both aim to deeply relax the body. In practice, though, they are quite different. Yin yoga emphasizes stretching the connective tissue, specifically ligaments and tendons in the joints, by passively holding poses for long periods of time.

Restorative yoga is also deeply relaxing, but focuses instead on the use of props (such as blocks and bolsters) to fully support the body as the poses are held. Both Yin and Restorative yoga aim to help relieve the effects of chronic stress.

A style of yoga developed by Beth Shaw in 1994, YogaFit seeks to blend calisthenics such as push-ups and sit-ups with yoga postures. The intent is to address the needs and wants of yoga practitioners in gyms, health clubs, and fitness centers (opposed to traditional yoga studios).

One Size Does Not Fit All

How to Do Legs Up the Wall in Yoga