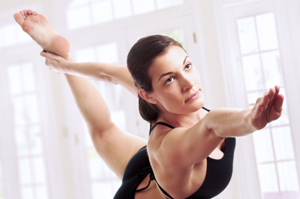 Bikram Yoga is a popular style of yoga that is sure to make you sweat. Practiced in a room heated to 104 degrees Fahrenheit and 60 percent humidity, this yoga style will likely leave you soaked by the final "Savasana" (Corpse Pose). Bikram Yoga was founded by the guru Bikram Choudhury in 1974. It's comprised of 26 postures practiced in systematic sequence. The aim of the practice is to gain focus and discipline, while detoxifying the body and gaining strength and flexibility.

Bikram Yoga is practiced in a mirrored room with the instructor at the front, calling out instructions. Though Bikram himself has jokingly called these yoga rooms "torture chambers," the practice has many benefits for beginning and advanced yoga students alike. Read on for more information about this steamy practice!

What you have not accomplished in five years, you will accomplish in five days.

It is said that the heat in a Bikram class is supposed to mimic the natural heat in the areas of India where Bikram himself learned to practice and teach. The warmth and humidity help to loosen the muscles, which allows for greater flexibility and depth in the poses. Additionally, sweating may help to detoxify and cleanse the body, flushing out waste materials. Practicing in a heated room increases the practitioner's heart rate, which not only strengthens the heart, but also improves circulation throughout the body.

Another component of Bikram Yoga that encourages healthy circulation is the practice of compression and extension. Each pose stretches or compresses a part of the practitioner's body, which temporarily restricts circulation. When the pose is released, fresh blood is pumped to the area — this is called extension. It is believed that this flow of fresh blood helps to cleanse the body of infection, bacteria, and toxins that have accumulated over time. An example of compression and extension is during Locust Pose, where practitioners press their body weight onto their forearms during the pose and releases their arms when the pose is finished.

In his youth, Bikram Choudhury was a competitive yoga practitioner in India. Born in Calcutta, India in 1946, he studied yoga under the guru Bishnu Ghosh from a very young age. Bikram became the youngest contestant ever to win the National India Yoga Competition — at age 11. He remained undefeated for the next three years, and then traveled through India with Ghosh demonstrating weight lifting techniques.

In 1971, he visited the United States for the first time. The trip was sponsored by the American Medical Association, with the intent for Bikram to demonstrate using yoga to successfully treat those with chronic illnesses. In 1974, he founded the Yoga College of India in Beverly Hills, California. Today, the self-proclaimed "guru to the stars" trains and certifies hundreds of new teachers each year from all around the world.

In the early 2000s, Bikram Choudhury argued in federal court that his specific sequence of yoga postures and breathing exercises should be eligible for copyright protection in the United States. He also contended that Bikram Yoga should only be taught by Bikram-certified instructors who follow his exact guidelines. In 2005, he was awarded the copyrights to his yoga sequence. Bikram remains a controversial figure in the yoga world today.

Components of a Bikram Practice

The Bikram Yoga practice sequence is a 90-minute class comprised of two breathing exercises ("pranayama") and 24 poses ("asanas"), each performed twice. The pranayama and asanas are always practiced in the same exact order. The class begins with pranayama, followed by 12 standing poses, 12 floor poses, and a final pranayama. The instructor stands at the front of the room, calling out precise instructions for each pose. The standing sequence includes five balancing poses, which builds focus and concentration. The floor sequence includes backbends, forward bends, and twists. The order of asanas and pranayama is as follows:

One key component of a Bikram practice is "locking the knee" during standing and balancing poses. This term does not refer to simply straightening the leg, nor does it mean locking out the knee joint by pressing your kneecap backwards — both of these actions can create hyperextension in the knee joint, causing injury.

To "lock the knee" actually means to contract the quadriceps — the group of muscles on your front thighs, between your knees and hips. Engaging these muscles during standing poses supports the knee and prevents the knee joint from being pushed too far backward. If you are contracting these muscles correctly, you should see your kneecap make a minor, upward shift (in the direction of your waist) and the muscle definition at the front of your thigh will become more apparent. Strengthening the muscles around your knees keeps them protected and strong. In other words, "lock the knee" means "lock the muscles around your knee." Protecting the knee joint during standing and balancing poses creates strength, stability, and stamina in the legs.

Turn Up the Heat

Whether you're looking to increase strength and flexibility, boost your immune system, or simply sweat the day away, Bikram Yoga might be the right style for you. Don't forget to hydrate well before class, bring a towel or two, and prepare for a sizzling practice!