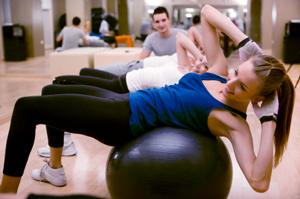 At first glance, the mind-body exercises of yoga and Pilates might seem nearly identical. Both use the body's own resistance to build physical strength and flexibility while reducing stress. But the origins, intentions, and methods of practicing yoga and Pilates are different. Keep reading to learn about the differences between these two disciplines!

There are a few attributes that overlap between the two. Both practices fall under the category of "mind-body" exercise because they focus on the mind's ability to control and guide the physical body. This allows many practitioners to gain self-confidence and poise not only in their practice, but in everyday life. Both yoga and Pilates concentrate on building physical strength, flexibility, and full-body coordination. Also, both apply methods of breath control, which in turn has a calming effect on the mind and internal body.

The Practice of Yoga

Each practice provides a number of mind-body benefits, but the approaches differ. First, let's explore the ancient discipline of yoga.

Yoga is more than just stretching and exercise. It's a system of mental and physical practices that originated in India possibly as long as 5,000 years ago. It includes philosophy, meditation, breath work, lifestyle and behavior principles, and physical exercise. Yoga's history is vast and complex, with dozens — perhaps hundreds — of texts, teachers, and traditions. The practices popular today are the result of the creative merging and development of philosophies over thousands of years.

Yoga was introduced to the United States around 150 years ago, and it grew in popularity throughout the 20th century. Today it is even considered mainstream. There are many different styles and levels of yoga, making it suitable for curious practitioners of all fitness levels and abilities!

The physical practice of yoga consists of poses, called "asanas" (AH-suh-nuhs), and breathing exercises, called "pranayama" (prah-nuh-YAH-muh). Any yoga class at a studio, gym, or fitness center will include several variations of asanas and some pranayama. Depending on the style and level of class, the asanas might include standing and seated poses, with an assortment of twists, forward bends, and backbends. Pranayama can vary from very gentle to highly stimulating exercises.

Yoga asanas will strengthen, stretch, and tone the entire body. A well-rounded yoga class will utilize every muscle! Some classes are more physically challenging than others, but all yoga poses help to simultaneously build and loosen your muscles and joints. Very little equipment is required for most forms of yoga — just a yoga mat and your body! Some styles also use props, such as blocks, straps, and bolsters, to enhance the practice.

Meditation, a discipline used to expand one's awareness, is a key component of a well-rounded yoga practice. There are different styles and practices of meditation, all with different aims. The ultimate and universal "goal" of yoga is to attain self-realization, which can be achieved by learning how to calm the endless stream of thoughts floating through the mind.

Practicing yoga asanas can provide a form of moving meditation, sharpening awareness and concentration by focusing on the body's movements. Though many people are familiar with seated meditation, it is generally understood that the yoga asanas were designed to prepare the body for long periods of seated meditation. The most common seated positions for meditation are actually ancient yoga poses. In yoga, learning to practice both asanas and meditation brings balance to both the body and the mind.

One translation of the Sanskrit word "yoga" is "union." Thus, the practice seek to bring union in some form or another: Body, mind, and spirit; earthly and divine; or even oneness with all. An ancient yoga text, called the Yoga Sutras, lays out some lifestyle and behavior principles that can help yoga practitioners attain balance and union. These principles are called the "yamas" and "niyamas," and they include concepts such as non-harming, cleanliness, and self-study.

Yoga's holistic approach to wellness improves balance, strength, and flexibility in body, mind, and spirit. The asanas improve flexibility, balance, and coordination, while cleansing and detoxifying the organs. Pranayama and meditation improve focus while reducing tension and stress. Lifestyle and spiritual disciplines help to increase awareness of one's everyday actions. Used together, these practices increase overall health and well-being. Other benefits of practicing yoga include:

The Practice of Pilates

Pilates might seem similar to yoga, but its methods are quite different. Keep reading to explore this discipline.

Pilates, created in the 1920s, is much younger than yoga! A German man named Joseph H. Pilates, who served as a nurse in World War I, developed the practice as a way to rehabilitate wounded soldiers. After he relocated to the United States before World War II, dancers began to learn of his techniques. They quickly adopted his exercise system and were able to use it to recover from injuries and stay in tip-top shape.

It wasn't until the 1990s that Pilates exercises finally became mainstream. Fitness buffs in the United States adopted the practice as a way to become — or remain — injury-free while developing long, lean, dancer-like muscles.

Focus on the Core

Many Pilates moves are similar to yoga for a good reason: They are actually derived from ancient yoga asanas! However, unlike a typical modern yoga class that focuses on balancing the whole body, a Pilates class emphasizes the core muscles. These include the abdominals, lower back, and the stabilizing muscles around the back, spine, and trunk. This group of muscles is often referred to as the "powerhouse" in Pilates because they provide the foundation around which the limbs and other muscles move. While other parts of the body do get attention in Pilates, the majority of work is centered around the core.

Like yoga, many Pilates exercises require only a mat. However, there are several Pilates exercise machines that allow for a more well-rounded practice and a wider variety of movements. These machines, such as the "Reformer" and the "Cadillac," use cables, trolleys, and pulleys to provide resistance. The machines provide a safe and precise method of weight training that is suitable for practitioners of all fitness levels. Additionally, the flowing movements used when working with Pilates machines helps to create long and lean muscles, sculpting the body's limbs like those of a dancer.

Practicing Pilates, whether on a mat or using a machine, utilizes the muscles in a controlled, stable, and fluid manner. This helps to create physical strength and toned muscles in a safe way that is adaptable to each practitioner's needs. For those with back injuries or neck pain, Pilates can be a useful way to regain strength and flexibility without over-straining the body. Rehabilitation is the foundation of Pilates!

Additionally, Pilates exercises create correct alignment, which helps to improve posture and overall physical coordination. It also increases the sense of one's body in space, called "proprioception," which can help to prevent injuries and general clumsiness in everyday life.

There are six principles of Pilates: Centering, concentration, control, precision, breath, and flow. As in yoga, Pilates moves are often coordinated with specific breathing techniques. Although the methods of breathing in Pilates differ from those in yoga, the synchronization of breath with movement helps to reduce stress, while improving poise and grace.

The first benefit that many Pilates practitioners notice is stronger abdominal muscles and a flatter belly! In addition, the core-strengthening exercises help to stabilize the spine, which improves posture, balance, and confidence. Weight training with the resistance machines creates strong, long, and lean muscles. Overall strength and flexibility gained through Pilates also helps to prevent and heal injuries. Unlike yoga's approach to unifying the mind, body, and spirit, Pilates focuses on the physical aspects of wellness. Its methodical and orderly manner is often appealing to those who want physical benefits without philosophy.

Yoga and Pilates work well as complementary practices. Some people choose to focus on yoga or Pilates exclusively, but many practitioners find cross-training benefits by including both in their training schedules. Remember that yoga classes vary significantly, while Pilates classes tend to be similar across the board. Depending on what you're looking for, you might want to try both and see what works best for you!

A Beginner's Guide to Yoga