Daily Deal: Up to 40% off Fan Favorites. Prices as marked. SHOP NOW 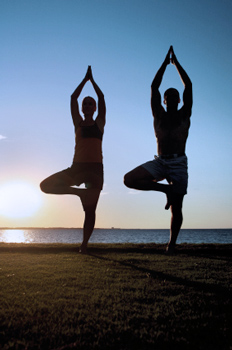 Yoga is a popular way to increase flexibility, gain strength, and reduce stress. But it's also a 5,000-year-old system of mental and physical practices originating in India, which includes philosophy, meditation, breath work, lifestyle and behavior principles, and physical exercise.

There is no singular fixed yoga tradition. Yoga's history is vast and complex, with dozens — perhaps hundreds — of texts, teachers, and traditions that sometimes agree with and sometimes contradict one another. The practices we recognize today are the result of the creative merging and development of philosophies over thousands of years, including Hinduism, Buddhism, and Jainism.

The six main variations of yoga in Hindu philosophy are raja, karma, jnana, bhakti, tantra, and hatha. Though the ultimate goals may vary, each style requires self-inquiry and certain disciplines to reach the desired state. One translation of the word “yoga” is “union” — thus, the practices seek to bring union in some form or another: Body, mind, and spirit; earthly and divine; even oneness with all.

The physical practice of yoga — hatha yoga — is the most predominant form in the West today, although it really only developed into its current form over the last 200 years. The goal of hatha yoga is to balance mind, body, and spirit through physical practice, breath work, and meditation.

Some archaeologists and yogis believe ancient yoga principles sprang from the shamanism and early spirituality of the Stone Age. However, these civilizations predate written history, so this theory remains conceptual and perhaps not entirely accurate.

Early Sanskrit (the Indian spiritual language) texts such as the Vedas (1500 BCE) and the Upanishads (500 BCE) explain and explore yoga as a means of access to the Divine and a way to connect the earthly form with the spiritual form. Comprised of songs and poems, the Vedas tell stories of the Hindu gods while referencing yoga techniques in Vedic rituals. The Upanishads, which focus on philosophy, contain the first documented use of the term “yoga,” where it refers to a firm holding back of the senses to join with the supreme state of being.

Note there is no mention of physical practice in these texts — only philosophy, worship, and meditation.

On the heels of the Upanishads came the Bhagavad Gita in 200 BCE, the Hindu story of moral dilemma, which underscored the importance of meditation to overcome suffering.

And in 150 BCE, the sage Patanjali published the Yoga Sutras, a collection of aphorisms guiding the lifestyle and habits of those seeking to attain wisdom through yoga. The sutras describe the personal power and liberation available through yoga, and include rules regarding prayer and worship, eating, breathing, attitudes, thoughts, meditation, and even sexual relations. 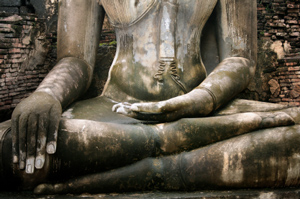 In the Yoga Sutras, Patanjali outlines the Eight Limbs of Yoga, or Ashtanga (“eight-limbed”) yoga. The eight limbs are inward restraints, outward actions, physical postures, breath control, withdrawal of the senses, concentration, meditation, and oneness with all. Similar to the Upanishads, Patanjali defines yoga in the Sutras as “the restraint of the modifications of the mind.”

Note that Patanjali's description of Ashtanga is different from the physical practice of Ashtanga Vinyasa Yoga followed in the West today.

It is the third limb, asana (AH-su-nuh), or physical postures, that most yoga practitioners today are familiar with. Yet beyond a brief reference to a seated meditation posture (the Sanskrit word “asana” literally means “seat”), physical yoga practice is notably absent from the Yoga Sutras. In fact, the only mention Patanjali makes of asana is in the instruction “Sthira Sukham Asanam,” which translates to “the yoga pose should be steady and comfortable.”

Other early yoga manuals, including the 14th-century Hatha Yoga Pradipika and the 17th-century Gheranda Samhita, have somewhat limited discussions of asana and do not contain any references to standing poses or Sun Salutations — the foundation for many contemporary systems of yoga. Instead, the early texts spotlight meditation and subtle body energies such as chakras and Kundalini.

Bringing the Focus to Asana Practice

In the early 1800s, the city of Mysore was a great cultural and spiritual center in India. The royal family of the Mysore Palace avidly supported yoga in all its forms, including hatha. The ruling prince, a devoted patron of the arts, compiled the Sritattvanidhi (shree-tot-van-EE-dee), a treatise on Hindu deities, music, games, natural history, meditation — and yoga.

The Sritattvanidhi included instructions and illustrations for 122 yoga poses, making it the most comprehensive document on asanas in existence at the time. But it was also the first yoga reference to focus solely on asana practice. Essentially, it could be considered the first yoga workout text.

The Legacy of T. Krishnamacharya

Born in 1888, Tirumali Krishnamacharya spent his early years studying various forms of yoga, including physical asana practice. The Maharaja of Mysore — a descendant of the same royal family that patronized the Sritattvanidhi — hired Krishnamacharya in 1924 to open a yoga school and teach the royal family.

Many of Krishnamacharya's students were young boys, for whom he developed a vigorous style of yoga meant to build strength and stamina — a “workout” that became what we know today as Ashtanga (or Vinyasa) Yoga.

During the latter half of the 20th century, two of Krishnamacharya's students, B.K.S. lyengar and K. Pattabhi Jois, developed and popularized Iyengar and Ashtanga, two of the most well-known systems of modern yoga.

In 1893, religious teacher Swami Vivekananda, considered a major force in the revival of Hinduism in modern India, introduced Americans to the philosophical side of yoga when he addressed the Parliament of Religions at the World's Fair in Chicago.

And in 1920, the influential guru Paramahansa Yogananda founded the Self-Realization Fellowship in Los Angeles to disseminate the meditation techniques of Kriya yoga. His bestselling 1946 Autobiography of a Yogi continues to inspire westerners seeking knowledge of yoga philosophy and Eastern spirituality. 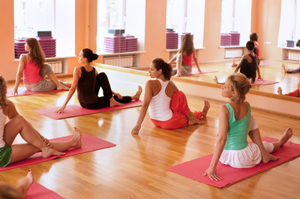 The early 1900s saw a boom of interest worldwide in fitness and bodybuilding. The popularity of British gymnastics spread to Mysore and influenced the yoga practices being developed by Krishnamacharya's school. The expanding interest in physical exercise helped fuel the rise of modern hatha yoga in America, as many teachers began to focus on the asana side of yoga, in addition to meditation and philosophy.

Russian-born Indra Devi, the “First Lady of Yoga” and an early disciple of Krishnamacharya, brought hatha yoga and the practice of asana to the U.S. by starting yoga schools in Hollywood in the 1950s. Her students included Hollywood starlets Gloria Swanson and Greta Garbo, and she wrote several books popularizing the physical aspects of yoga.

Yoga soon flourished throughout American popular culture: Richard Hittleman's “Yoga and Health” became the first-ever yoga television series in 1961; Lilias Folan's “Lilias! Yoga and You,” followed a decade later on PBS (each series ran for over 20 years); and Hittleman's book The Twenty-Eight-Day Yoga Plan sold millions of copies, bringing yoga into the homes of middle America.

The social and political climate of the late 1960s created an environment of exploration and self-searching. Flower children seeking higher consciousness turned to Eastern mysticism and yoga, planting fertile soil for the growth of yoga in modern America, which has increased exponentially since the Summer of Love.

The Beatles' trip to India and their affiliation with Maharishi Mahesh Yogi and Transcendental Meditation (TM) inspired many Americans to take up meditation as a hip new habit. As ashrams and spiritual communities sprang up across the country, meditation's new popularity led American universities to begin research on the medicinal or therapeutic value of yoga.

In 1969, Yoga teacher Swami Satchidananda kicked off the 1969 Woodstock festival, addressing a crowd of 500,000 with the exhortation to “let all our actions, and all our arts, express yoga.”

As the fitness industry boomed during the 1970s, the physical practice of yoga evolved. Influential teachers such as B.K.S. Iyengar, Yogi Bhajan, and Bikram Choudhury arrived in the United States with their distinct styles of practice. Iyengar's weighty Light on Yoga, a guide to over 200 yoga poses and 600 photos, has become the seminal book on yoga postures.

The “no pain, no gain” aerobics craze of the 1980s led to a rise in fitness-related injuries, which in turn prompted even more interest in yoga as a viable and low-impact way of staying fit and healthy. Yoga videos by Jane Fonda and Raquel Welch hit the market, as yoga classes expanded their reach to gyms, health clubs, YMCAs, and recreation centers across the country.

It is estimated there are about 16 million yoga practitioners in America today. The yoga market was worth nearly $5.7 billion per year in 2008 — an increase of 87 percent from 2004. And the North American Studio Alliance estimated in 2005 that there are over 70,000 yoga teachers in North America alone.

Whether people are drawn to yoga for the physical practice, for the mind-body connection, or because of their doctor's recommendation, it's clear that this now-giant industry offers something for everyone — including inner peace and self-knowledge. The discipline with ancient roots has sprouted into a practice suitable for a thoroughly modern world.