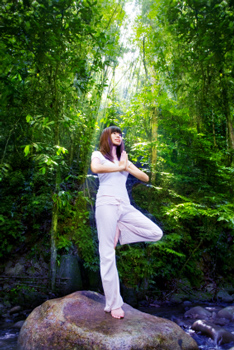 Yoga is more than a way to stretch your body and reduce stress. It's also a 5,000-year-old system of mental and physical practices, including philosophy, meditation, breath work, lifestyle and behavior principles, and physical exercise. The history of yoga is vast and complex, as its texts, teachers, and traditions have been known to both support and contradict one another.

Although much of what we call "yoga" today was developed in India, there is no singular fixed path or yoga tradition. The practices we recognize today are the result of the creative merge and development of philosophies over thousands of years, including Hinduism, Buddhism, and Jainism. There are many different branches of yoga that spring from these philosophies. Six of the most well-known, major variations are:

The physical practice — hatha yoga — is the most predominant form in the West today, but it's only a small part of the vast yoga world. Though the ultimate goals of each branch may vary, they all require self-inquiry and discipline to reach the desired state. One translation of the word "yoga" is "union." Each branch of yoga seeks to achieve union in some form or another: Body, mind, and spirit; earthly and divine; even oneness with all. It is not necessary to choose just one path, as many of the practices and benefits overlap!

Literally meaning, "royal yoga," raja yoga is the devotion to the eightfold path of yoga, as laid out by the ancient sage Patanjali in the classical yoga text, the Yoga Sutras. The eight limbs of yoga include:

Raja yoga is a precise and contemplative path. It emphasizes control of the intellect and cultivation of the mind through meditation to gain enlightenment. Practicing raja yoga teaches you to control your thoughts through meditation, eventually mastering your earthly, ego-based self and uniting with your higher, spiritual self. For more information on the eightfold path of yoga, see the guide, The Eight Limbs of Yoga.

"Karma" literally means "action" or "deed." In Hinduism, it refers to the total effect of your actions — bringing upon yourself the inevitable results of your words, thoughts, and deeds. Karma yoga is often referred to as "the yoga of action." This branch aims to achieve union with the divine through selfless service and the offering of actions as a form of worship. Practicing karma yoga shifts your attitude from one of ego-based self-service to one of pure altruism. Yogis who practice karma yoga believe this type of service leads to a peaceful future. By practicing selfless service and acting on good thoughts now, you are preparing your future to be free of selfishness and full of positivity.

Whenever you perform work as a way to selflessly serve others, you are practicing karma yoga! This includes volunteering, coaching, even offering to cook dinner for a stressed-out friend. The attitude is what counts — if you're doing it out of love and service, that's what matters most!

Bhakti yoga is the yoga of devotion. This method of yoga centers around love and dedication to the divine, with the aim of connecting with one's "personal God." The practice may include devotional disciplines, worship, prayer, chanting, and singing. Yogis who practice bhakti yoga see the divine in everything — a belief and attitude that leads to tolerance, acceptance, and peace in everyday life. Many yogis refer to the work of Mahatma Gandhi and Mother Teresa as ultimate examples of bhakti yoga.

Although he was raised in the Hindu religion, Mahatma Gandhi studied many different religions throughout his life. In Gandhi's philosophy, the concept of "God" was not tied to any one religion. He ultimately came to believe that all religions have truth, love, compassion, and nonviolence as their core beliefs. When asked late in his life if he was a Hindu, he replied, "Yes, I am. I am also a Christian, a Muslim, a Buddhist, and a Jew."

Literally meaning "knowledge," jnana yoga uses self-inquiry, questioning, meditation, and contemplation to gain enlightenment through knowledge of the body and soul. This path emphasizes serious study of yogic scriptures and texts to develop intellect and wisdom. It is a direct means to insight, but is also considered the most difficult of the yogic paths. Scholars, priests, and monks are often examples of jnana yogis. The jnana yogi seeks understanding of the spirit or true self by remaining open to various philosophies and applying the knowledge and insight to life. Jnana yoga often appeals to those drawn to rational thought and open-minded discourse.

One of the most commonly misrepresented paths, "tantra" — literally meaning "weave" — uses ritual to expand awareness. The philosophy of tantra yoga is based on the worship of Shakti, the divine feminine energy. Tantra views life and all existence as the creative dance between Shakti and her lover, Shiva, the male expression of the divine. Balancing the masculine and feminine energies in one's life and yoga practice leads to the awakening of "kundalini" — the divine cosmic energy that brings forth self-realization.

Tantra yoga emphasizes on expanding your awareness to discover the presence of the sacred within any experience. Unlike the ascetic yoga practices that seek to transcend the earthly body, tantra recognizes the body and its desires as manifestations of the divine. Through ritual and ceremony, tantric yogis express their reverence for what is sacred.

The most well-known branch of yoga in the West, "hatha" literally means "sun and moon." This practice, developed around the 15th century, focuses on physical postures, breathing exercises, meditation, purification rituals, and the subtle body (the body's aura and energetic pathways). The goal of hatha yoga is to purify and strengthen the body, calm the mind, and achieve health. Today, the term broadly refers to all physical yoga practice and commonly means a gentle yoga practice that includes stretching and stress-reduction techniques. Ashtanga, Iyengar, Sivananda, and Vinyasa are all examples of modern hatha yoga.

Many Paths for One Yogi

Even if you've never set foot in a yoga studio, it's possible that you've already practiced one or more of these branches of yoga. Volunteering at a soup kitchen is an example of karma yoga. Studying various philosophies and applying them with common sense and insight is an example of jnana yoga. Even celebrating your birthday with ritual and gratitude combines tantra and bhakti yoga. Whatever your path, remember that you don't need to limit yourself to one branch or belief. Yoga is available to all!

How to Determine Your Dosha