Now reading: How to Do Dolphin Plank in Yoga
Share
PrevNext 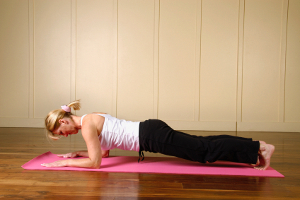 One of the most popular core-building exercises in yoga is Plank Pose, also known as High Push-Up Pose. Performing Plank with correct alignment, though, can be nearly impossible for those with wrist pain or carpal tunnel syndrome. This variation, called "Dolphin Plank," is done on the forearms, which takes the pressure off the wrists while providing all of the benefits of Plank Pose.

Plank Pose is a major component of Sun Salutations, which are performed several times during Ashtanga, Vinyasa, and Power Yoga classes. For those whose wrists are sore from sports, weight-lifting, computer work, or other repetitive activities, Dolphin Plank can be a great modification to any yoga class that includes Sun Salutations!

Dolphin Plank builds strength through resistance of your body's weight, which helps to increase bone density. This pose strengthens the arms, legs, and core muscles, including the abdomen, chest, and low back. It also strengthens the muscles around the spine, which helps to improve posture. In addition, Dolphin Plank stretches the shoulders, hamstrings, calves, and feet.

Yoga gave me the ability to calm down.

The concentrated effort required to hold Dolphin Plank calms the mind and regulates the nervous system — benefits that are also therapeutic for stress and mild depression. Practicing this pose for several minutes will build stamina, endurance, and focus.

Do not practice Dolphin Plank if you have a recent or current shoulder, back, arm, or neck injury. Also avoid this pose if you have high blood pressure, or infections of the eye or inner ear. Always work within your own range of limits and abilities. If you have any medical concerns, talk with your doctor before practicing yoga.

Dolphin Plank is a great modification for those with wrist pain and carpal tunnel syndrome — but it's also a challenging core strengthener in its own right! It can take some time to build up enough strength to hold the pose. Be sure to take it slowly and not over-stress your shoulders. Try these modifications to find a variation of the pose that works for you:

Dolphin Plank and regular Plank Pose will benefit the whole body when practiced in correct alignment! Keep the following information in mind when practicing Dolphin Plank:

Strong to the Core

Dolphin Plank can strengthen your core and shoulders fast! Practice the pose several times a day to tone your muscles and re-gain focus. Try holding Dolphin Plank for extended periods to build stamina, focus, and endurance. For extra variety, change up your regular Sun Salutations by practicing Dolphin Plank and Dolphin Pose instead of Plank Pose and Downward-Facing Dog. Think of those friendly bottle-nosed creatures, and have fun with the Dolphin variations!

How to Do Half Lord of the Fishes Pose in Yoga

How to Do Thunderbolt Pose in Yoga